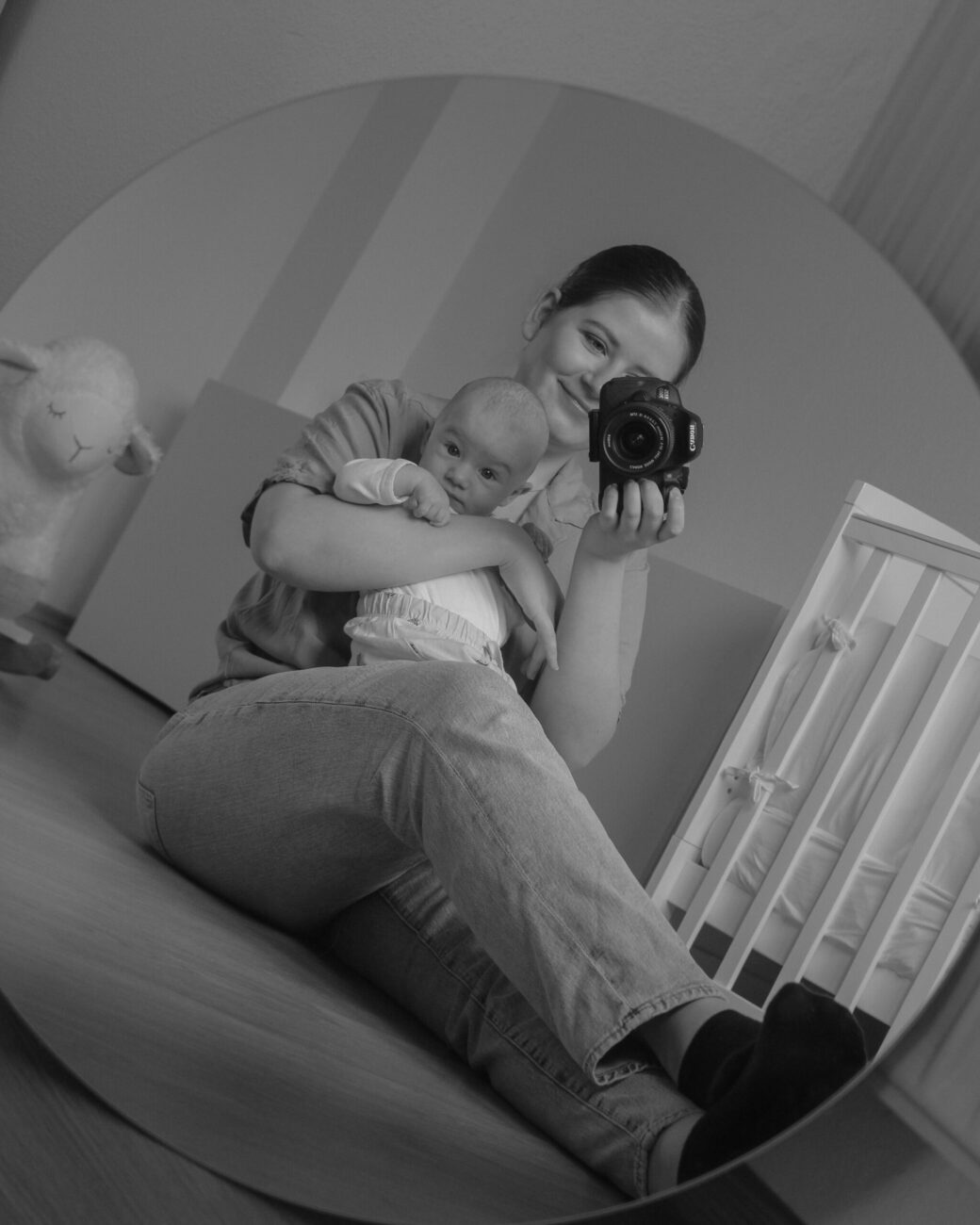 For the last couple of weeks I‘ve tried to put up a facade. It was very difficult for me to communicate how I truly felt as a new mom, I guess. My thoughts were racing at lightning speed, and I couldn‘t come to terms with what I was thinking or feeling. Yet again, I fell into the trap of comparison. I was constantly comparing myself to other women who just gave birth who truly seemed to be so happy and content. Please don‘t get me wrong I was grateful, but I was far away from being happy. It even went so far that I was questioning whether or not we made the right decision. I felt alone, disconnected, and incredibly sad – I couldn‘t understand myself anymore. What was wrong with me? Why could I not enjoy motherhood like everyone else did? It took us months to get to this point, it was my biggest wish, so why am I having these thoughts?

Full of shame, I kept quiet and pretended everything was fine. I didn‘t dare to say how exhausted I was, and how desperate or bored I was on some days. I didn‘t want anyone to feel pitty with my child because apparantly I wasn‘t a good mother. It was frustrating and disheartening to say the least, to pretend someone you are not.

After giving birth, I struggled to look at myself in the mirror because my body felt so foreign and odd, I was just so uncomfortable. Every time I took a second to scroll through social media or watched tv, my body image issues got worse and worse, I felt instantly defeated. I was bombarded by cultural expectations of how our bodies should look postpartum. From all the perfect images of new moms on social media to unrealistic movie and television portrayals of postpartum women to slimmed down pictures of celebrities in gossip magazines mere weeks after they gave birth – it had a devastating and lasting impact on my mental health. The reality is that it‘s highly unrealistic to get back that quickly, so I tried to remind myself that the concept of boucing back does not exist. I had to accept that my pregnancy changed my body in a variety of ways; my skin stretched, my hips widened, my breasts changed their density and shape, even my feet grew.. Having a past of disordered eating patterns this was a lot to digest, but my body had to expand and shift in profound ways to develop, make room for and grow another human being. Yet still, I couldn’t help but feel frustrated, insecure and even ashamed about the way my body looked after I had given birth.

The first weeks were definitely the hardest. I wasn‘t sleeping because I was terrified that my baby would suddenly stop breathing, and when I did sleep, I would dream that he died. Between the sleep deprivation I was constantly tending to and nursing my fussy newborn. And to be honest, I underestimated the exhaustion of breastfeeding. It‘s a trip, and I felt immense pressure to get this right. I was also not prepared for all the mom shaming or the people who always had an opinion about how to raise my child. I tried not to let that get to me, but it bothered me a lot and it ended in a lot of mental breakdowns. My son is happy and healthy and instead of getting encouraged or applauded, sometimes it felt like a thankless job.

Being a first-time mom can be incredibly lonely, and no one really seems to be talking about it. Not only are you often stuck in the house with a helpless newborn, but there is very little time for anything else. Even the simple task of taking a shower seems to be a priviledge. Having the weight of caring for a newborn on your shoulders is absolutely nerve-wracking.

Even today, on some days, I am overwhelmed. I feel weak, and I lack energy. And it‘s not just the sleepless nights or the temper tantrums, but the constant feeling that you‘re screwing up. The worrying if he’s keeping up with his ages, or the agonizing over the decisions that affect his futures. It‘s a lot to handle. With this in mind, I am finding it harder and harder every single day to be present when I can‘t stop thinking about all the things that need to be done. At the end of the day, I care most about being a mom. But I am also an employee, and a housekeeper, and a partner, and a daughter, and a friend, and much more. It‘s really hard to be everything all at once and not feel like you‘re good enough even when you‘re trying your best. It‘s a vicious cycle, and I definitely lost a part of myself during those early times that I‘m still trying to recover.

Feeling like I wasn’t prepared at all for this new stage of life, I have a hard time with people who try to make parenting seem like sunshine and roses because it isn‘t. And what a shame it is to make people feel like it should be. I put so much pressure on myself to be the perfect mother that it almost broke me, I constantly felt like I failed motherhood. The early weeks taught me a lot and I am frightened to share these experiences because there is so much guilt and shame revolved around it, but I‘ve realized that only because I share the honesty about real motherhood does not mean that I don‘t love my child to death. I am sharing my experiences because I don’t want any mama to feel alone in her struggles. We need to start the conversation, and we need to be cautious in the pressures for perfection we place upon ourselves and other women entering motherhood. We’re all in this together.

Mamas, we got this!

no toxic masculinity over here.

One of my all-time favourite desserts, banana brea

I hope you all had a lovely Christmas.